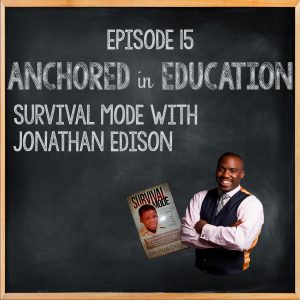 It is difficult to imagine students growing up enduring such pains as losing friends and family through death.  It is almost unfathomable to think of students losing those close to them through abandonment. And yet, other students may experience homelessness, depression, failures, and other setbacks. Setbacks that lead to poor grades, absenteeism, or worse.

What about those students who face all of the above? This is exactly what happened to Jonathan Edison. Jonathan’s adverse childhood experiences were a recipe for disaster. Yet, Jonathan found light down each dark path and forged ahead to show that focus and perseverance can reshape one’s destiny.

So today on Anchored in Education, Jonathan joins us to discuss his experiences as detailed in his best-selling book, Survival Mode: A Memoir of Hope, Love, and Survival.  Jonathan also talks about how he has remained anchored in education through his various programs offered to schools to help students succeed.

Jonathan Edison grew up in an environment that was a prescription for failure. After exposing him to drugs and violence, his mother was removed from the household by the Department of Social Services when he was five years old. Two years later Jonathan’s father left to start a new family on another side of town. Then, his grandmother Cloraine that took on the challenge of raising him died of cancer when he was 14.

Now homeless, Jonathan was forced to take up residence in his aunt’s basement. To afford the $50.00 a month in rent and his portion of the electric bill, he worked a full-time job as a dishwasher/bus boy at Chili’s Grill and Bar in the evenings and on weekends. He graduated from high school with a 1.63 grade point average and completed his first year of college with a 0.82 GPA before dropping out completely.

Instead of becoming another statistic, Jonathan found the courage he needed within himself to rise above adversity. He enrolled in remedial classes at Wayne County Community College. In 1993, Jonathan graduated with an associate’s degree as a part of the Urban Teacher Program. In 1995 Jonathan continued his education at Wayne State University, earning a bachelor’s and a master’s degree in only 3 semesters. During college, Jonathan worked as a bus attendant, waiter, gas station attendant and often slept in his car so that he could hold down his jobs and attend classes.

After teaching for four years, at age 27 Jonathan became the youngest assistant principal in the history of Detroit Public Schools. In 2002, he was named Wayne County Spokesman for Success. Then, along with hundreds of other dedicated educators, Jonathan was fired. With no savings, clients or plan, in 2004 he launched Edison Speaks International, a motivational and training development company. Since then Jonathan has shared his “Strategies for Success” with over 1,000 audiences and 1 Million people, authored four books and has spoken in over 40 States.  Jonathan’s Fortune 500 clients include: CVS Pharmacy, Daimler Chrysler, FBI, Folgers Coffee, General Motors, Hewlett Packard, McDonald’s and State Farm Insurance.  You can follow Jonathan on Twitter: @jonathanedison