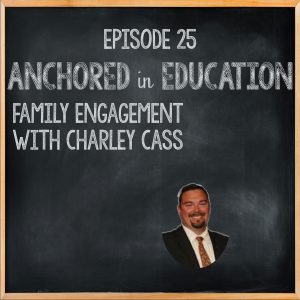 One of the most crucial aspects of education is involvement from families.  Research even shows how valuable it is on students.  Increased family engagement leads to higher grades, better attendance, and more likely that a student will have a successful post-secondary career.

I honestly believe schools all over are getting a better grasp on this as they look at ways to positively engage families.  Good News Call of the Day is one popular way.  Many schools lean on social media to connect with their families.  The key is knowing where, how, and when to connect so you reach as many as you can.

For today’s Anchored in Education, I’ve invited Charley Cass back to talk more on family engagement.  Charley has some creative ways to connect with families at his school.  Plus, he shares other ideas that are inexpensive and invaluable at the same time. You might remember the last Charley was on we talked about the stress awards can have on students.  Click here to listen to that episode.

Charley Cass has been a southern Illinoisan his entire life.  After high school he attended SIU-Carbondale.  Since then he has completed multiple graduates degrees, all at SIU-C.  After college Charley has stayed around southern Illinois working at Mt Vernon Township High School in Mt. Vernon, IL, a high school principal at Elverado High School in Elkville, IL, and is now a middle school principal at Central Junior High in West Frankfort, IL.  Added altogether he has been Anchored in Education for 17 years.

Charley has stayed involved with the Illinois Principals’ Association.  He currently serves as the Region Director for the Egyptian Division.  He is a frequent organizer of EdCamps throughout the region to help provide meaningful professional development to educators at all levels.  He is a frequent presenter with topics covering the impact of poverty in schools, restorative practices, and social media branding.  One of his greatest accomplishments came from his hard work as middle school principal.  In 2016, Charley was named the Illinois Middle School Principal of they Year.

Charley lives in rural West Frankfort with his wife and two children.  His wife is also in the kid business as she is the co-owner of a childcare center with another in progress.  You can find Charley Cass on Twitter: @CharleyCas