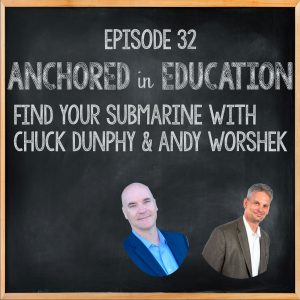 Last week David Marquet joined me on Anchored in Education to talk about intent-based leadership. This is the leadership model David used when he took over the USS Santa Fe, which at the time was the worst performing submarine in the entire Navy fleet. David said when he implemented this empowerment among his crew, there was an immediate change in climate. In just a couple of years, the Santa Fe went on to receive the highest inspection grade the Navy has ever given.

I’ve read David’s book Turn the Ship Around, and now I’ve had the chance to talk to him. I have no doubt that his leader-leader model works much better than a leader-follower model. But I got to thinking, how do we understand more about the positive effects of intent-based leadership? How about taking to some men who served with David on the Santa Fe. That’s exactly what we have this week.

Chuck Dunphy and Andy Worshek had the distinct honor of serving on the Santa Fe with David. Andy brings the unique perspective of an officer who served on the Santa Fe before David arrived. He can attest to how bad it really was. Chuck and Andy talk with us this week on how intent-based leadership is for real, it’s empowering, and it’s refreshing. They talk about how it not only changed their lives aboard a submarine, but how it has continued to impact their personal and professional lives.

Chuck Dunphy serves as the Chief Operations Officer at Turn the Ship Around! A Client Service Specialist with 20 years of experience as a Navy Supply Corps Officer as a Navy Supply Corps Officer and young Junior Officer, Chuck served with David on the USS SANTA FE as his “Chop”, executing all levels of logistics. This served Chuck throughout his successful career in leading highly successful teams as the Supply Officer in charge of Logistics for all submarines in Norfolk, VA at the Naval Submarine Support Command, as the Assistant Supply Officer on the USS KEARSARGE and as a Customer Service and Contract supervisor at the Defense Logistics Agency.

After retiring from the Navy Chuck joined the team at Turn the Ship Around to continue to spread the message of Intent-Based Leadership to ensure that everyone has the opportunity to feel the difference that quality leadership and effective teams can make.

Andy Worshek served as Sonar Chief and Chief of the Boat for the USS Santa Fe with David Marquet. He is an expert in developing leaders and is prominently mentioned in David’s award winning book, Turn the Ship Around! For nearly a decade after serving with David on USS Santa Fe, Andy took the
leader-leader approach to three more Navy commands and enjoyed the
benefits of developing leaders.

His unique perspective as one who served in both the follower and leader role with David exposes both the challenges of implementing intent-based
leadership™ from all levels, as well as the incredible results of practicing these principles. Since his retirement from the Navy, Andy served as the Director of Human Resources and Personnel Development for McGee, Hearne & Paiz, LLP, the premier accounting firm in Wyoming. Andy is now a speaker and facilitator with Turn the Ship Around!