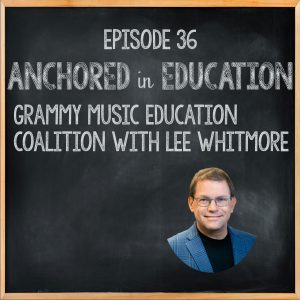 How much? Enough that The Recording Academy executives realized they needed something more to promote music education. Conversations began and what grew from that idea is now known as the GRAMMY Music Education Coalition.

Today on Anchored in Education, the inaugural executive director, Dr. Lee Whitmore joins us to talk more about the Coalition. Lee’s history and background makes him the perfect candidate to lead the Coalition, as well as share more with all of us.

Dr. Lee Whitmore is the inaugural executive director for the GRAMMY® Music Education Coalition, after working as a co-convenor of the initiative with Berklee College of Music for close to two years. In this role, he leads a nationwide effort toward universal music education participation in American public elementary schools and substantially increased participation in secondary schools. Cofounders and convenors of the GRAMMY® Music Education Coalition include the Recording Academy, Berklee, the National Association for Music Education, the NAMM Foundation, and more.

Prior to joining the GRAMMY Music Education Coalition as Executive Director, Lee serve as Berklee’s vice president for education outreach and social entrepreneurship. In this role, he led the college’s preeminent youth development program, Berklee City Music, which uses popular music to serve nearly 44,000 young people throughout North America and the Caribbean. He was also a management committee member for Amp Up NYC, a partnership formed by the New York City Department of Education, Little Kids Rock, and Berklee to bring popular music education to students and educators throughout the city.

Previous to his Berklee appointment, Lee spent six years at Avid, a world leader in creative digital media technologies. Over the Avid tenure, his work included senior leadership roles in worldwide marketing, education strategy, and also sales and technology in its Sibelius division, the world’s most used music notation platform.

At times earlier in his career, Lee has worked at Korg USA; founded and managed Korg’s education division, SoundTree; was Cablevision’s vice president for education; and for eight years he served as the Technology Institute for Music Educators’ (TI:ME) treasurer. Lee is also an Alfred Publishing author of books and curricula on music technology and education. Music, education and technology are core to Lee’s personal and professional endeavors. He received a Doctor of Education degree from Columbia University Teachers College, New York, NY, while serving as adjunct faculty member at the school, teaching courses on the effective uses of technology in music education to doctoral and masters level students.