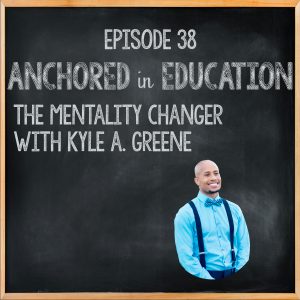 Much of what we do is either made or ruined by our mindset. Think about it, how often do we convince ourselves that what we’re doing is a waste of time? That we aren’t making progress. Or that we are only capable of failing. Or quite possibly we are quick to take credit when things go right but point at others when things go wrong. This is what our mentality does to us if we don’t have it aligned with positivity.

Thankfully, my guest today recognizes how people are and has been working at getting them to change their mentality. In fact, that is what Kyle Greene calls his book: The Mentality Changer. Kyle wants people to change their mindset so they can begin changing the world. And he is going to share with us today how easy this is to get started.

Kyle A. Greene is one of the most sought after youth motivational speaker’s in the country. He is also a two time self-published author. He serves as a many mentor to man and a coach in his community. Kyle was born in Savannah, Georgia but he grew up in Jasper County, South Carolina. He was raised by his elderly grandmother (Irene Greene-Gaston) who instilled so many life lessons into who the man he has become today. At a very young age, Kyle excelled in sports and academics. He attributed his success on and off the field to his family, his coaches, and more importantly his village.

Kyle self-published his first book, The Mentality Changer, a book that’s widely popular all over the country. He is in the process of writing a sequel The Mentality Changer II that is expected to be released in the Winter of 2019. Kyle has recently co-authored a book with his daughter Aubria titled, #FatherDaughterGoals. He has also recently completed a book for teachers titled, The Teacher in YOU! with a release date pending.

Kyle has been sharing his message of love, hope, and purpose at middle schools, high schools, charter schools, alternative schools, Djj, prisons, churches and nonprofit organizations all over the southeast. In his spare time, Kyle runs a very successful basketball training academy in Blythewood, South Carolina. He trains student athletes from the age 5 to high school. Kyle is a 2004 graduate of Benedict College where he earned his degree in Computer Information Science. Kyle was fortunate to discover his voice in a very loud world when Trayvon Martin’s voice was went silent. He had a rally at Finlay Park in which he coined, “The 1K Hoodie March in Honor of Trayvon Martin.” Over three thousand participants showed up for this event that would become the springboard into his purpose driven life. Kyle credits a lot of his success to his mentor the late Rev. Senator Clementa Pickney (both from Jasper County). He is married to Charmane and they have two amazing children “Bri Bri” and “KJ”. Kyle believes that every person has the potential to be great and he wants to help others to tap into their greatness.

Resources from this episode