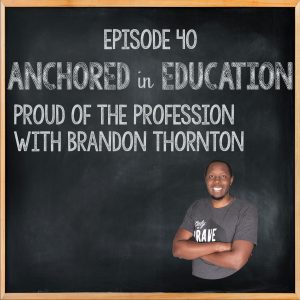 Week after week on Anchored in Education we sit down for a conversation with educators who are doing something unique or have something unique to contribute to the profession. Every now and then though we like to introduce you to a teacher you may not have heard of yet but is making a huge impact in our profession.

This week we introduce you to Brandon Thornton. Brandon is a teacher at Bloomington High School in Bloomington, Illinois.  Brandon was featured in a sidebar column in Illinois State University’s alumni journal. In this column he stated his views on the profession, what he’d like to see more of in education, and emotionally overloaded children.

Brandon Thornton was born and raised in Rock Island, Illinois. He graduated from Rock Island High School in 2007. After high school, Brandon attended Illinois State University where he received a B.S. in Secondary Mathematics Education in 2011, and a M.S. in Special Education in 2016. He currently is working on his Ed.D in Special Education at Illinois State University, and teaching at Bloomington High School as a LBS1 teacher where he is humbled everyday.

Brandon has traveled the world and worked with children from all walks of life including Africa, South America, and the Caribbean. They all had one thing in common which was a passion for learning. It is his dream that his students will leave the classrom with this passion and the willingness to share their knowledge and abilities with those who come into their lives. They can’t do any of those things without a relationship first—which is Brandon’s number one priority.