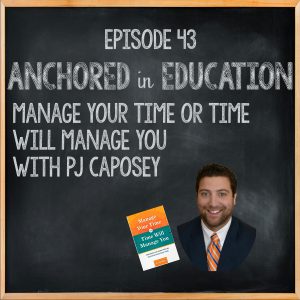 I don’t think I would be alone in saying that at some point managing time has been a struggle. Too often though we just say that time management is our issue. But have we ever thought about what exactly time management issues truly are? What if time management didn’t really exist; and instead it was just the symptom of a larger issue?

That is exactly what Dr. PJ Caposey proposed in his amazing book Manage Your Time or Time Will Manage You. PJ gives us eight potential root causes that could result in what we often refer to as just time management.

The perfect way to say goodbye to 2019 and hello to a brand new year is to have PJ join Anchored in Education to help us better understand how we can fully utilize our time.

PJ Caposey is a dynamic speaker and a transformational leader and educator. PJ began his career as an award-winning teacher in the inner-city of Chicago and has subsequently led significant change in every administrative post he has held. PJ became a principal at the tender age of 28 and within three years was able to lead a small-town/rural school historically achieving near the bottom of its county to multiple national recognitions. After four years, PJ moved to his current district, Meridian CUSD 223, as superintendent and has led a similar turnaround leading to multiple national recognitions for multiple different efforts.

PJ has written 7 books for various publishers and his work has been published online for sites such as ASCD, Edutopia, and the Huffington Post. He works in the Education Department of two universities and in a myriad of capacities with the Illinois Principal’s Association including Principal Coach and author of the first complete stack of MicroCredentials offered in Illinois.

PJ’s schools/districts have been recognized with the following accolades:

Personally, PJ has been recognized in the following ways:

PJ is a sought after keynote presenter, consultant, and provider of professional development and has recently keynoted several national conferences specializing in time management, the tyranny of the status quo, school culture, continuous improvement, social media, and teacher evaluation. He lives in Northwest Illinois with his wife, who is also an educator, and their four children.