Have you ever stopped and considered the language we use everyday? Most of what we say or do becomes such second nature that we never give it a second thought. But maybe we should.

That’s what retired submarine Captain L. David Marquet proposes we do in his new book Leadership is Language. He points out that the language we use comes from the Industrial Revolution era. In a time in which work was separated between those who think and those who do.

In his new book, Leadership is Language, Marquet proposes a new playbook and six new plays that completely changes how we approach what we do and how we do it. 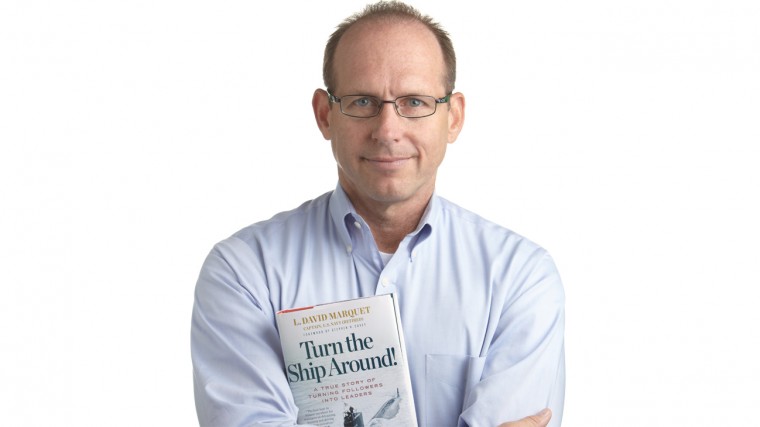 A 1981 U.S. Naval Academy graduate, Captain Marquet served in the U.S. submarine force for 28 years. After being assigned to command the nuclear powered submarine USS Santa Fe–then ranked last in retention and operational standing–he realized the traditional leadership approach of “take control, give orders,” wouldn’t work. He “turned his ship around” by treating the crew as leaders, not followers, and giving control, not taking control. This approach took the Santa Fe from “worst to first,” achieving the highest retention and operational standings in the navy.

After Captain Marquet’s departure from the ship, the Santa Fe continued to win awards and promoted a disproportionate number of officers and enlisted men to positions of increased responsibility, including ten subsequent submarine captains. Further, having been on the ship, Stephen R. Covey said it was the most empowering organization he’d ever seen and wrote about Captain Marquet’s leadership practices in his book, The 8th Habit.

Captain Marquet is the author of Turn the Ship Around! A True Story of Turning Followers Into Leaders. When it came out, Fortune magazine named it the #1 must-read business book of the year, and USA Today listed it as one of the top 12 business books of all time.

Captain Marquet retired from the Navy in 2009, and speaks to those who want to create empowering work environments that release the passion, initiative, and intellect of each person. His bold and highly effective framework is summarized as “give control, create leaders.”

He is a life member of the Council on Foreign Relations, and in 2015 was named to the American Management Association’s “Leaders to Watch” list.

The 411 on SLPs with Kelly Gosch

A Look Into ASCD with Ronn Nozoe