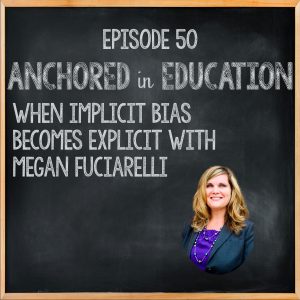 What is your reaction when someone calls you biased? If you are like most people, including myself, you probably immediately go on the defensive exclaiming how you are in no way a biased person. Don’t worry, you are not alone.

In fact, that is exactly how I felt when I watched a TEDx of the same title of today’s episode. The speaker was Megan Fuciarelli, and she said, “All of us in this room are biased.” I thought it was a bold statement, but as I continued listening to Megan’s talk, I realized just how important her topic was. Not only did I begin understanding that biases were normal, I also began to understand how letting my implicit bias become explicit could have a negative impact on those I serve.

Megan Fuciarelli has graciously agreed to come onto Anchored in Education to feature an episode on bias. She allowed the use of her TEDx title to be featured on today’s episode because it has such a profound message.  Megan is leading the way in creating a more united society by promoting understanding, knowledge, and awareness in social justice issues.

Megan Fuciarelli serves as the Executive Director and Principal Consultant of US2, Inc.—a consulting firm focused on issues around equity and inclusion. As a retired school administrator, she has over 20 years of experience in the social justice realm. Now residing in Michigan, Fuciarelli has spent a bulk of her educational career in the Chicago area. She works with a team of like-minded individuals whose primary goal is to help unite society through equity and inclusion work. In her career, she has served as an educator as well as building and district-level administrator. She has presented for local, state, national, and international audiences in the areas of Restorative Practices, Equity and Inclusion, Culturally Responsive Pedagogy, and the Whole Child. She is very proud of her work with Teaching Tolerance as a contributor and author of the Critical Practices Webinar Series. Megan holds a BS in Elementary Education as well as a M.TL in reading, and a M.Ed in Educational Administration. Fuciarelli has also completed an ESL Certificate and the Urban School Leadership Program at Harvard. She continues to serve on many committees and board at both the local and state levels.