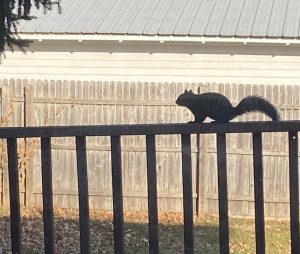 “Trust the still, small voice that says, ‘This might work and I’ll try it.’” -Diana Mariechild

I have a little foyer area off my kitchen that overlooks my backyard. I do most of my writing from this spot, sitting at my secondhand pub table that came with four swivel stools. When pauses come in my writing I let my gaze drift out the sliding glass door windows. And I watch the squirrels.

Squirrels are often likened to people who struggle to remain focused on one thing. As someone struggles to focus, another person says “squirrel” and everyone laughs. I’m guessing this is because a squirrel’s movements look a little spastic. But it hit me today while watching squirrels that maybe we should try to be a little more like them.

Sometimes it is necessary though to provide protection against predators. Ever watch a squirrel dig a small hole in your yard? Did you assume they were burying food to store during winter? While squirrels do in fact hide food, many of the times you see them digging in the yard is an act of illusion.

A squirrel has a heightened sense of when predators or thieves are nearby. These would be thieves who had been observing the squirrels will quickly converge on the recently buried food to steal the goods. Yet when they unearth the squirrel’s hiding spot, they find the hole empty and void of food. Meanwhile, the squirrel has quickly moved to a different spot free from observation to hide the food they were still keeping with them. Consider this the squirrel’s version of sleight of hand.

When we watch magicians we study intently, knowing we are going to catch them in the act of trying to deceive our eyes and minds. Before we know it, the trick is over and we are once again left flabbergasted, convinced that maybe this magician truly has supernatural powers. Educators have the ability to be magicians in the classroom as we transform learning into something magical that takes students on an adventure.

It seems quite fitting with the times now, but believe it or not back in 2012 I was leading my students through a handwashing lesson, teaching them about bacteria and viruses long before it became so regular in our vernacular. Jennifer would swab different areas of the school and classroom and then took the samples to the hospital to grow. She then brought them in for students to see. I then had a couple students volunteer to have their hands swabbed before and after washing hands. A couple days later I had results to show them. Doing this not only taught my first graders about the importance of washing hands, but it also immersed them into science without even knowing it.

Or even now in the classroom. We work on our personal whiteboards each day. Students get a whiteboard and marker. Once back to their seat I toss them a sock to use an eraser. They love the sock toss. However, they don’t know I am assessing their hand-eye coordination. I can then work with the PE teacher to address any concerns, areas for improvement, or get suggestions from him on what I can do to help foster growth in the deficit area.

Squirrels are resourceful in terms of seeking out food and shelter. Squirrels are some of the best communicators as they use a variety of tools such as scent, sounds, and their tails to communicate with other squirrels.

We must use this same resourcefulness to be successful in what we do. Effective communication comes in many forms. But we need to evaluate the most appropriate means of communication for a given situation. I find meetings to be a waste of time. When I was principal, my superintendent would hold administrative meetings almost weekly. And they were a colossal waste of time. Held under the guise of collaboration, they would last a minimum of two hours because she couldn’t keep herself or anyone else focused.

If you can send a text, send the text. Longer communication? Send an email. Follow up in person but at least you have the initial communique in writing. But know that we also communicate in many different ways that sometimes send stronger messages than our spoken or written word.

Nonverbal cues go a long way in communicating. I made it a practice when someone came in to talk to me that I not only moved my phone from the line of sight but I placed it face down and it was always set to vibrate. Whoever it was visiting me deserved my focused attention. It’s amazing how little a person can be made to feel when the person we are trying to communicate with is more interested in their phone. I had a former board member who regularly was on his phone during meetings. Sometimes if it was something funny he would show nearby board members. One of the insignificant people I have referenced through earlier posts would constantly be on her phone when I was trying to speak to her. I eventually quit trying to talk until she was ready.

Body language is another significant way to communicate with someone else. Be mindful where you put your hands when conversing. Crossed arms and hands on the hips can send messages of defensive or aggressiveness. Clenched fists can represent anger. Pursed lips can mean disgust. It is a lot to think about, but if we practice mindfulness then we will naturally become aware of our nonverbal cues.

A squirrel knows how to get from point A to point B, but not always in the least restrictive way. A squirrel will meticulously make its way across a power line, on top of a privacy fence, or even up the side of a brick building. They look at their destination objectively. Getting there is not a choice but a must.

We’ve also seen several humorous videos of squirrels helplessly failing to reach the feeder intended for birds. Maybe the pole leading to the feeder has been greased up. Or quite possibly the feeder has been placed on some sort of spinning mechanism that prevents the squirrel from maintaining balance and positioning to eat the seed. But watch closely, a squirrel is determined to achieve their goal, rarely giving up after just one attempt.

Have you ever seen the meme about failures of some of the GOATs of their profession? You know, the one about the hopeful basketball player who was cut from his freshman basketball team. Or the story of a record label Decca telling an up and coming quartet from Liverpool in 1962 that guitar bands are on their way out and that they probably had no future in the business.

Thankfully for sports enthusiasts and music fanatics both Michael Jordan and the Beatles remained determined to revolutionize their respective professions. People are going to try to keep you from your aspirations. Their reasons will vary, but the goal is all the same, to watch you fail. But get up and keep going.

Keeping your focus and movement toward the goal regardless of the people or obstacles in your way will give you the ultimate win. I’m sure Dan Reynolds, Wayne Sermon, Ben McKee, and Daniel Platzman, members of the pop rock band Imagine Dragons felt the same way when they all co-penned their chart topping hit “Thunder.” The second verse has always been my favorite:

Kids were laughing in my classes

While I was scheming for the masses

Who do you think you are?

Dreaming ’bout being a big star

You’re always riding in the backseat

Now I’m smiling from the stage while

You were clapping in the nosebleeds

Don’t give in or give up. Stay focused and forward moving so you, too, can get your “Thunder” moment.

My mother once got into a routine of feeding a squirrel scraps of food. He became known as Mr. Squirrel. On sunny days Mr. Squirrel could often be found lounging on the backstep, waiting for the next morsel of food. Squirrels are one of the few wild animals that will eat from a person’s hand. Mr. Squirrel regularly showed his trust by taking crackers and peanuts from our hands.

He was trusting, not dependent. Mr. Squirrel could still scavenge for food and avoid predators. Trusting and being dependent are not the same things. We must have trust if we are going to find success. Like a squirrel, we do not want to trust everyone. Not everyone intends to keep us safe. But when we find someone that is truly delivering help and compassion for us, we need to trust and confide in them. It is the only thing that will keep us sane in some of the most trying moments.

Trust goes beyond your feelings toward someone else. You cannot learn to trust anyone if you do not trust yourself. Reassurance is nice occasionally to confirm we’re moving in the right direction. But you need to trust yourself that you are a professional. You might mess up. You might fail. So what? Trust yourself to gather the pieces and try again. When a squirrel trusts the hand reaching out to feed it, it is also putting trust in their decision to approach the hand. Don’t trust only others; trust yourself first.

One of my favorite things to watch is when a squirrel scampers across the rail of my deck outside, stops briefly, then effortlessly and fearlessly leaps from the rail onto an evergreen branch nearby. Out of curiosity, I measured the distance of this leap. It’s right around six feet at a 45 degree angle. Should the squirrel miss, the plummet to terra firma is just shy of 12 feet. Nevertheless, rarely does a squirrel hesitate to make its move.

Well, you might be thinking, squirrels sure do show hesitation when they freeze in the middle of the road. Squirrels also dart around erratically as a resourceful tactic to avoiding predators. When a predator is quickly approaching they freeze, appearing vulnerable, then at the last minute dart away. Yes, this is why they freeze in the road in front of your car. It’s also why as you grit your teeth and close your eyes waiting to feel the thud you often are surprised when you look in your rearview mirror and see an empty road as the squirrel is quickly scampering to safety.

We cannot know for sure that a squirrel does not have fear, but we can assume that a squirrel’s heart rate increases in heightened moments. But it doesn’t stop them from taking a necessary leap forward. We must exhibit fearlessness in what we do.

Making a decision to transition to a new role or position is scary. But the thought of remaining in the same place forever, to me, is terrifying. We cannot be stuck on the rail because we are afraid to leap to a nearby branch that will deliver us to our destination.

You don’t hear many people look at squirrels and declare their desire to be like them. But like many things, squirrels are too quickly judged by those who do not truly understand the wide ranging capabilities these small creatures possess. To me they seem more well balanced in many aspects of their life, making them fairly successful in whatever they may set out to do.