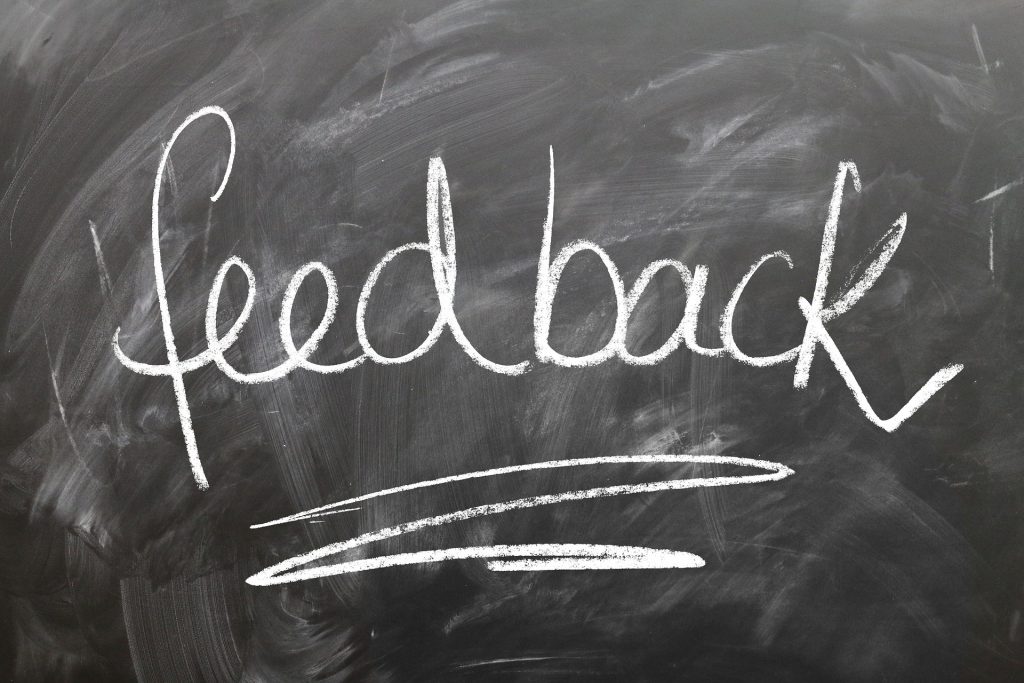 “We all need people who will give us feedback. That’s how we improve.” - Bill Gates

I am convinced receiving true feedback that will benefit the improvement of my overall practice is something of a myth.

I do not believe I’ve ever been in a position of employment in which I did not receive some sort of annual review or evaluation. Even in my decade of working various jobs—after graduating high school and before becoming a certified teacher—I had some sort of evaluation. And they all had one thing in common: pitiful. Oh wait. I had a couple jobs in which I was never evaluated. That’s a whole other post I’m afraid.

I’m not trying to offend any previous supervisor (would wager a great deal that not one of them reads this anyways); I’m simply stating the truth. I never once walked away with a better idea of how my actual performance stacked up against the expectations. I, like most, went in to make sure I was still going to be employed and in some instances, to see if I was receiving additional pay. Other than that, I was simply going through the motions. Just as my supervisor was doing the same.

Believe it or not, since I’ve been a certified educator I have only been evaluated under the Performance Evaluation Reform Act (PERA) that became law in Illinois on January 1, 2010. I had no other standard to compare methods of evaluation. But it was such a big thing as I was entering the profession that I was intimidated by how everyone was acting. “This will change how I am rated” and “This is just a ploy to get rid of teachers” were the common themes I heard. I took it upon myself to just do one thing: do the best I can. If someone didn’t like that, then they could get rid of me.

I do believe in all my time in education where I have received an evaluation, I was an excellent except for once. And that was my first year in teaching in which my principal said, “You’re doing an excellent job but I never give first year teachers an excellent.” (Talk about a real motivator.) The problem with this is that what is being said (you’re excellent) versus what is being recorded (proficient because first year teachers don’t receive an excellent rating) does not align. It also came with very little feedback, which caused another problem for me since I knew I could use improvement. The same thing happened as principal. I received my rating but it was absent of constructive feedback. As superintendent I received my rating from the Board and something that resembled feedback. It was “we think you should notify us more.” When I produced evidence of hundreds of communications and advanced notices, I said, “Okay, here is my evidence of communication, so can you please be more specific so I know what exactly it is you’re looking for from me in terms of communication?” The response: “Oh you’re doing fine. Keep it up.”

That takes me into the heart of what I’m writing about today: what is it about feedback that makes it so elusive it is almost like a mythical creature? When we do get feedback, it is almost like it is given just because something is expected to be said during an evaluation. I posit that the reasons include giving feedback makes people uncomfortable; giving feedback is viewed as a waste of time; feedback is often biased; feedback is often surface feedback and fails to go into depths that bring about actual improvement.

Many times an evaluator may see areas in which they believe someone can improve, but they are not comfortable enough to say it. This could be for many reasons. Maybe they’re new to a supervisory role and the person they’re evaluating is a veteran. This lack of confidence on the evaluator’s part prevents necessary feedback from happening. Maybe it’s because they aren’t sure how the feedback will be received. I have seen firsthand what this is like.

My first year of principal I had to evaluate many veteran teachers. Tack on the fact that I had only taught first grade for four years and now, a first year principal, I was about to tell these teachers what I felt they could improve upon. I took my evaluator training quite seriously, but I also had enough sense to know that the evaluation part focuses on the actual practice and that varies greatly by classroom and grade/content.

Nevertheless, I finished my first observation of a tenured teacher. I set up a post-observation conference and made sure the teacher had all supporting documents to review ahead of time. The next morning, well before the majority of staff arrived, that teacher was standing in my doorway in tears over her horrible evaluation.

This was an excellent teacher through and through. I invited her in so we could discuss it. She said, “I’ve never received a proficient before.”

The Danielson Framework for Teaching includes 22 components over four domains. This teacher may have received 5 proficients over the four domains. The rest were excellent. (I’m not joking, she was an amazing teacher.) What she was telling me is that since the Danielson Framework had been around, she had always received 22 excellents. In her mind, she was now a failure.

It was actually a great evaluation to start with because it allowed me the opportunity to get comfortable with people getting upset when I told them they weren’t excellent through all four domains. Which leads me to believe that most being evaluated are not comfortable enough to hear the truth about their teaching.

What most evaluators must remember is that they are in that evaluating role because someone has entrusted them with the task of evaluating the performance of employees. If you’re not comfortable doing it, then you shouldn’t be in the role.

“I’m just going through the motions on this because it has to be done,” is what I was told. “I don’t want to be here doing this anymore than you want to be here listening to it,” is another thing I’ve been told. “This is something I will not miss when I retire,” is something I’ve heard when retirement is in sight. If these are the mindsets of your supervisor, consider yourself screwed out of the opportunity to receive true feedback.

Sadly, I think many people view their evaluation as just going through the motions. They are dotting their i’s and crossing their t’s so they can receive their rating and move on. I had one teacher once open up their post-observation conference with, “I’ve done these for over 30 years and will be retiring within the next couple of years, so just tell me where to sign.”

I’m often reminded of a quote I read somewhere (for the life of me I can’t remember where) in which it said something along the lines of when you retire will you be able to say you had 35 years of experience, or did you have one year of experience 35 times? There are a lot of hard truths about this. Educators hold on to classroom practices for years because the activity is fun. I’m all for fun activities, but they should be relevant to learning—hmm…foreshadowing to a future blog post? I think so.

A supervisor who treats evaluations as a waste of time will soon find everyone else adapting the same mindset. Improvement fails to happen because everyone is just doing their own thing with little regard to what is working and what isn’t.

Let’s face it, regardless of the evaluation tools in place, evaluations can be massaged so to speak. Of course, speaking in this manner would be to allow one’s explicit bias to impact the evaluation. “I don’t like this person so I’m going to score them lower” or “I think this person is the bee’s knees so I’m going to make sure they get a good evaluation” are both examples of allowing explicit bias to run the evaluation. There is really nothing I can do or say about this. It happens. It shouldn’t. But it does. The other bias is what has me more concerned.

When an evaluator walks into a room for an evaluation, they are flooded with first thoughts: classroom setup, teacher presence, content presentation, and so on. Quick glances around will provide instant quick thoughts. You will like the classroom setup, teacher presence, or content presentation. Or you won’t. Every bit of that is okay, as long as it remains a first thought and doesn’t impact the overall evaluation.

The episode with Megan Fuciarelli was called “When Implicit Bias Becomes Explicit.” That is the problem when our first thoughts begin to blind us to what is really going on. Maybe you love the classroom setup so much you fail to notice how ineffective it really is in setting up and managing the physical space. Maybe you loved the content presentation because it was flashy but you failed to notice the lack of engagement. Or worse. Maybe you did notice the lack of engagement but you’re so over the moon with the teacher’s presence and demeanor that you can forego marking needs improvement in some areas because you just know this is an excellent teacher.

There really isn’t a whole lot more to say on bias in evaluation. We agree it shouldn’t happen. We know it does. It’s just further proof that quality, honest feedback is a myth.

And finally, this is what I believe is the largest problem of the feedback myth. Evaluators who go through all the motions give feedback that is surface level. “This teacher is doing a great job” or “This teacher is a great addition to the school community” are a couple great examples. These feel good statements do warm the heart. It allows us to believe or understand that we are doing a good job. But it doesn’t give a person the needed feedback to go and improve.

I think of improvement like I think of how sin is mentioned in Romans 3:22, “For all have sinned and fall short of the glory of God.” If we are without sin, then I believe that we are without the need to ever seek improvement. Perfection in something is not attainable because we are not perfect people. Feedback should lead to some sort of call to action on improvement in one or more areas.

I wish I had a magical solution for the feedback myth. If I did, I’d be typing this from a remote mountain cabin somewhere. Instead, I offer the idea of joint training. I believe that supervisors and subordinates should work with a third party unaffiliated with the district (or organization) in providing the framework for evaluation and feedback. Employees must know that feedback is not meant to degrade one’s work but to offer suggestions of improvement instead. Evaluators must understand that providing feedback must be evidenced based and not bias based.

This is where I believe states like Illinois got it wrong. A lot of money was invested into PERA but the only training provided on the new evaluation went to administrators. Teachers were left to witness the new practices firsthand. And naturally, even when the administrator was doing what was the best intentions, it caused a blow back on the evaluation system. It tainted the perception of Danielson’s Framework—a framework that even Danielson has said shouldn’t be used in the capacity it’s being used.

We have to do better with evaluations and feedback. It begins with trust (another upcoming post), and it continues with an understanding by both parties. A person has to be comfortable to give the feedback to a person who is comfortable and ready to receive it. When this is achieved, amazing things will happen.